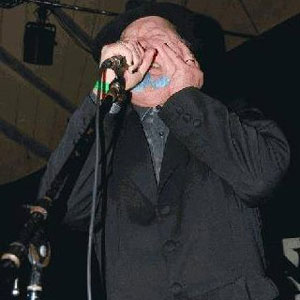 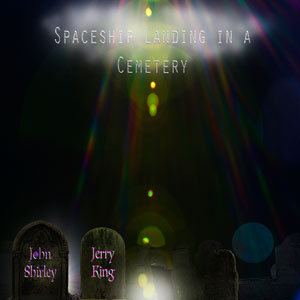 Spaceship Landing in a Cemetery: Songs of Death and Transcendence by John Shirley and Jerry King... and a host of other hot musicians. Soon to be distributed in Europe by Black October Records.

Album Notes: Dark poetry riding on the hot current of progressive rock, alt jazz, and pure musical creativity: John Shirley—vocalist and lyricist—collaborates with Jerry King, respected progressive guitarist and multi-instrumentalist songwriter. Superb musicians from the Lizardz and other wild projects collaborated with Jerry and John to create Spaceship Landing in a Cemetery, an album that takes us from death to transcendence; from the dark night of the soul into the light of inner freedom. John's lyrics have been compared to Lou Reed and Leonard Cohen and Don Roeser; Jerry King's untethered guitar and compositional power has been compared to King Crimson and other prog greats.

And I'll Burn Like a Vampire in the Sun, recorded in 2016 with guitarist-composer 064 Freeman (Artichokes, Process, Seething Brunswicks, Funkadelicatessen) . The EP includes bonus instrumental versions of two of the songs. The players included Bill Sparks (Seething Brunswicks) on baritone and tenor sax, Darren Potter (Funkadelicatessen) on drums, Jim Lynch on bass and Craig "Bonzo" Bonner (Bankrupt Sugar Daddies, The Boobs) on organ; 064 played guitars (including baritone guitar) and produced the recording. The songs:

The 2016 EP, Mountain of Skullz, includes three tracks from Red Star, covers of Iggy Pop & the Stooges and Lou Reed, and the original version of "Sonic Fingers." 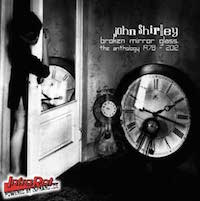 The double album Broken Mirror Glass: The Anthology 1978-2012 was issued in 2013 by Infrarot and includes thirty songs—in chronological order—from more than three decades of musical work by Shirley. A digital version was re-issued in April 2016 by Black October Records and is available for download through Bandcamp.

Another 2013 album, John Shirley and His Criminal Accomplices, offers seventeen songs from the same period. (It is available on iTunes.)


"Johnny Paranoid" performed by The Screaming Geezers in June 2013
John Shirley opens the ceremonies at LitPunk 2, in San Francisco at the Makeout Room,
Friday, April 2, 2010 with "John the Revalator"

The Music in the Sentence
By John Shirley
(Originally posted April 21, 2016, on SFSignal)

I was scarcely more than a boy when I attended the Clarion Writer's Workshop in Seattle. One of the instructors was Harlan Ellison, and being a fan of Ellison's I was on edge with excitement, even more like a cat on hot bricks than usual. In those days I was wildly callow, the very soul of impulsiveness. One night I dropped acid—and I dropped down on Ellison, just missing him, from the boughs of a tree as he walked underneath. After the necessary fulmination, Harlan let it go. He put up with me, he said, because I "heard the music in the sentence". You either heard the music in prose, he told us, or you didn't.

I've been singing lead in rock bands for more than thirty years. I still write songs, sing, and perform. Tracks I recorded from 1978 to 2012 are found in the Broken Mirror Glass collection from Black October Records.

You see, for years, writing science fiction and fantasy was mostly my day job. Music was my real life, then–first punk rock, then something I called "futuristic funk" and then a post-industrial sound. I wrote paperback novels chiefly to support the band. Book advances paid for rehearsal rooms, bought hamburgers for players, paid for studio time to work up demos, paid for gas to the gig. Music made me feel good–otherwise, I was bad at feeling good. I signed a record deal, made a record, played at CBGB and the Pyramid, and crashed through the china shop of my youth. The rock scene was powder keg volatility and I was always flicking lit matches; it's possible I'd be dead now, if I'd taken a certain deal at CBS records...

Then I became the father of twin boys, and the responsibility eased me away from bands–and away from drugs. I felt a genuine grief in letting rock'n'roll be displaced from the center of my life, and wrote about the feeling of loss, transposed into a near-future cyberpunk setting, in the story "A Walk Through Beirut".

Fortunately, I love science fiction. But music kept cropping up in my books. My novel City Come A-Walkin' was set in a futuristic rock club, featuring a character inspired by Patti Smith. A near-future rocker features prominently in the Eclipse volume of my cyberpunk trilogy, A Song Called Youth. The sf novel I'm writing now, Stormland, doesn't involve rock characters, but it has its own soundtrack, in my mind, including "Black Planet" by the Sisters of Mercy.

For me, writing prose has always been intertwined with music, while writing a song—for most anyone—involves storytelling. Rare is the song which doesn't tell a story. Often the story is hinted at; you can infer a great deal from the lyrics of "Mack the Knife". Sometimes, as in Dylan's "All Along the Watchtower", it's a view from on high, a whole dramatic landscape revealed. Other times, as in many a Lou Reed song–"Street Hassle", say–an entire story is told, with a beginning, middle, and end. Every country-western song tells a story, as do most rock songs. There's a clear-cut scene playing theatrically out in "Honky Tonk Women". And I do hear the music in prose. When I give a live reading of a story, I hit the rhythms of the sentences hard, I explore resonance, like the vibration at the heart of music; at key moments I ring the emotional bells of the imagery.

When I write, I usually listen to music; it might be Stravinsky, it might be John Coltrane, it might be Savages, it might be Blue Öyster Cult–I have written the lyrics for eighteen songs recorded by that band–or it might be Motorhead. I don't find it distracting–music embeds me in the energetic fields of the writing, and somehow makes it come alive for me...

"Basically punk music saved my ass. It gave me an alternative identity to the
tortured and unacceptable one I'd sewn raggedly together."—John Shirley

As the '70s wheezed to an end, the larger musical world had already absorbed punk's meteor strike. But the disaffected children of a depressed, third-tier West Coast timber town were just getting started. With '60s idealism long gone rancid, punk's blaring sound and willfully obnoxious aesthetics found fertile soil in Oregon. "It was some time in '76, and I went into this import-record store and asked if they had any Sex Pistols," Shirley recalls. "And the guys working there just looked at each other and said, 'My God, another one!' People had been coming in all day, asking about this British band they'd never heard of. "What happened was, Parade magazine ran an article warning parents about this stuff called 'punk rock.' To me that was like, they're warning parents? Must have."

"We were just sort of trying this on for size," Shirley says. "You know the early punk thing where people would spit on bands? If you look at videos from that era, you can see people sort of tentatively spitting. It was like that."

"Our scene was small," he says. "But for some people, that was all there was. For a few, it was that or suicide, y'know?"

It was Winter of 1978. Mark Sten, John Shirley and others began putting shows on around town. Corboy saw Shirley perform with the band Terror Wrist. Corboy approached John to listen to some songs he had written. The two set a time to play. Mark Sten was on drums, and Dave Propp, bass. Corboy said he wanted to call the new group Sado-Nation.

From History of Portland Rock 1 by SP Clarke

Another seminal figure in the local [Portland] alternative music scene was John Shirley. An avid connoisseur of the budding DIY ethic related to the new music sensibility emanating from the United Kingdom, Shirley, along with Mark Sten, opened the first punk venue in Portland, the Revenge Club, in 1977. Shortly thereafter, Shirley formed one of the first punk bands in town, Terror Wrist...

[Following a] Ramones concert in late 1977, countless local musicians were inspired to form bands. One of the first bands from that renaissance to break out was Dave Corboy's SadoNation. Minnesota-born Corboy, began playing in rock bands in 1963 at the age of fourteen. After migrating to the Bay area in the late '60s, he continued to play in a variety of rock bands until 1973, when he migrated to Portland to attend art school. Corboy continued his schooling through 1977, when the call of rock and roll lured him back to the stage. Inspired by John Shirley's songs with Terror Wrist, Corboy was prompted to launch his own band, when Shirley's subsequent band, The Monitors, broke up. With Mark Sten (this time playing drums) and bassist Dave Propp, Corboy and Shirley broke new ground with SadoNation. John Shirley left SadoNation late in early 1980 to pursue a writing career in New York City... [and] was replaced as vocalist for Sado Nation by Leesa Nation...

"My song with Obsession, 'I Am Electricity,' is about a guy who's combined cyberpunk connectivity with a transcendant state of semimadness to become part of the electrical grid around him."—John Shirley

"I almost signed with the elder John Hammond who had a subsidiary label at Columbia," shirley has said. "I didn't know who he was. He was this old man who looked like Gary Moore telling me to get rid of my band and work with the guys he wanted me to work with. No way! And I thought that he would come crawling back. Then, he had a stroke, so I blew my shot. John Hammond wanted to record me, but I blew it. This was the guy who discovered Dylan and Springsteen. You don't get another chance like that."