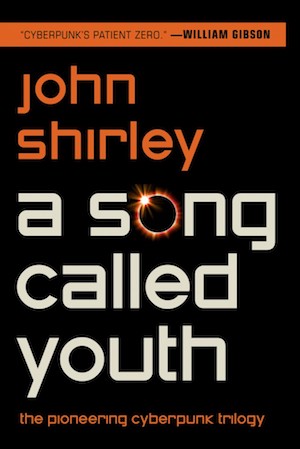 "A Song Called Youth might very well be John Shirley's signature production, still ringing with the clarion call of a bygone era."–Asimov's

Also informally known as the "Eclipse Trilogy", Eclipse, Eclipse Penumbra, and Eclipse Corona are set in a version of the twenty-first century where a new Russian Soviet has invaded Western Europe causing massive disruption and destruction. Their armies were opposed only by the (unseen) use of tactical nuclear weapons, resulting in a stalemate. The New Soviet—more oligarchic than its communist predecessor—has been stymied. Europe is in chaos and the USA is in crisis. To keep order and free troops for combat, NATO has contracted with the Second Alliance Security Corporation (SA), a right-wing, private security company of mercenaries (an anticipation of Blackwater-style privatization of the military). NATO does not realize the Second Alliance is part of a hidden fascist agenda. The heroes of the series are the New Resistance, who are fighting to expose and defeat the SA's racist policies and neofascist attempt to grab power.

The scope of the story is worldwide, but the main action mostly takes place in Europe, on a small Caribbean island and on humanity's first space colony.

The three novels have, most recently, been re-published separately by Dover.

All three novels were re-published in 2012 by Prime Books in a single-volume 800-page omnibus (print and ebook) with a new introduction by Richard Kadrey and biographical notes by Bruce Sterling.

John Shirley on the A Song Called Youth trilogy

The trilogy was prescient in more ways than one. It predicted Koch-brothers type astroturfing, media control as it's being done now, international armies for hire, and a return of neofascism. It also predicted outfits like "Anonymous" and wikileaks.

"...I first met him in 1977 when he was into spiked dog collars. No one was ready for his insane novels...there just wasn't anything else like that being written then— no hook or label like cyberpunk, no opening—so they were totally ignored. If those books were published now, people would be saying 'Wow, look at this stuff! It's beyond cyberpunk!'"—William Gibson (interview in Storming the Reality Studio)

"The Eclipse trilogy by John Shirley is perhaps one of the finest examples of cyberpunk 'war' novels available. A mesmerizing dark future setting, really coherent intrigue, heavy-duty warfare and lots of characters you care for... will keep you awake at night."—francobrain/Transputer Qasar(Italy)

"A cyberpunk-ish series by John Shirley. The three books: Eclipse, Eclipse Penumbra, and Eclipse Corona are probably the most incredible cyberpunk stories I've read to date. Throughout the three books, as the years progress, so does the technology. In most series, the technology is absolutely stagnant. Shirley has done an incredible job at creating a story that will drive you to read on and on with desperation as you come to the end of the second book. If you want to see how to write cyberpunk, this is the series. As a genre, cyberpunk seems to be fading. If more people read this series, it might get new life. Definitely!!!"—NCRP 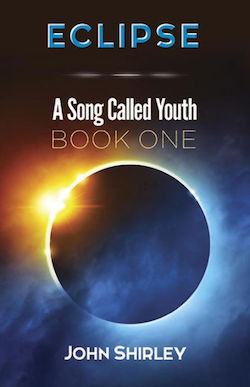 This gripping cyberpunk novel—the first in a trilogy—envisions a future in which the economy of the United States has crashed, while the Soviet Union not only remains intact but invades Western Europe. With the collapse of NATO, governments have abdicated control to an ostensibly private antiterrorist and security firm, the Second Alliance. But the mercenaries of the alliance are working from a hidden fascist agenda and eager to impose its own kind of New World Order. In the United States, in the vast space colony FirStep, and on the artificial island Freezone the SA shoulders its way to power, spinning a dark web of media manipulation, propaganda, and infiltration.

Their only challenge comes from the New Resistance, a rogues' gallery of rebels who battle mind control and weapons of mass destruction with sex, drugs, and rock 'n' roll.

They recognize the SA for what it really is: a racist theocracy hiding a cult of eugenics. Enter Rick Rickenharp, a former rock'n'roll cult hero; a rock classicist out of place in Europe's underground club scene, populated by wiredancers and minimonos, but destined to play a Song Called Youth that will shake the world.

The "eclipse" of the title refers to the shadows that war casts across the light of conventional morality, allowing citizens to tolerate the erosion of their civil rights. The plot shifts between the political chaos of Earth and the vast space colony of FirStep. Originally published in 1985, the novel offers prescient views of the rise of drone surveillance, the growth of Europe's radical right movements, and an increasingly dark web of media manipulation and propaganda. A compelling tale in its own right, Eclipse offers a wealth of action and intrigue that reaches a thrilling climax and conclusion in the sequels Eclipse Penumbra and Eclipse Corona.

A complex, bizarre, and unique vision of the coming century, with a kaleidoscopic mix of politics, pop, and paranoia.

Avid cyberpunk fans will appreciate this updated edition of a cutting-edge classic.

Jason McGregor, Nerds of a Feather

In many ways, this is quintessential cyberpunk but, in many ways, Shirley (as he so often does) blazes his own trail. Unlike the stereotypical image of cyberpunk, he sets this story in Europe rather than Asia; focuses on military more than corporate matters; and has a space presence in addition to a ground-based computer focus. Aficionados of cyberpunk will find much to like while people tired of the "same old same old" will find much that is fresh.

In the early 21st century, America has suffered an economic collapse, allowing the Russians to invade Western Europe. In a fairly static war where tactical nuclear weapons are used but not ICBMs. the battlefront shifts between Amsterdam and Paris, with the Russians slowly yielding. Behind NATO lines, governments are cynically turning over responsibility for internal policing to the Second Alliance, ostensibly a private antiterrorist and security company, in actuality an amalgam of Moral Majority and fascist power-brokers with vast resources. Resistance to the SA is scattered and ineffectual until the advent of Steinfeld, a Mossad-connected agent being funded by the industrialist Witcher for undisclosed reasons. Slowly, Steinfeld puts together a team: Smoke, former lecturer and anti-fascist; Rickenharp, last of the old-fashioned electric-guitar rock musicians; Hard-Eyes, a revolutionary in search of a cause; and Claire Rimpler, daughter of the founder of a space colony, fleeing an SA-inspired takeover. These subplots, and others involving resistance moles within the SA, are well orchestrated; the scenario is chillingly plausible and carefully developed. 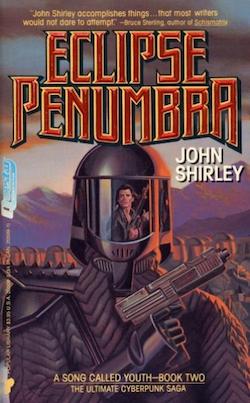 The guerilla war against the Second Alliance and its plans for a European apartheid intensifies in this second volume of John Shirley's A Song Called Youth trilogy. From its beginning, thwarting the Second Alliance has been the first priority of the New Resistance; now the SA has decided it was time to return the favor, Resistance could not be allowed to interfere with the progress of the SA's master plan. Eliminating the rebels will clear the way for Project Total Eclipse, which in turn would stretch the SA's shadow over every remaining outpost of humanity—selecting scapegoats, directing violence, and creating an immutable new order. And the penumbra of the Eclipse would establish complete SA control over the Grid, the space colony and the survivors of the war... and also it to decide the fate of humanity. 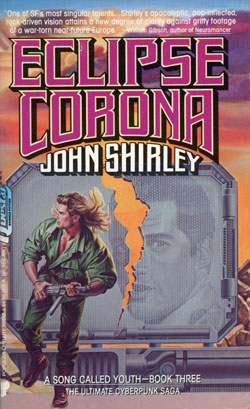 The power of the Second Alliance has coalesced and terrorism institutionalized. New concentration camps bring the horrors of "Ethnic Cleansing" to a terrifying intensity. The SA stands poised to conquer the ruins of Europe with brutality. Media manipulation has become mind control—and mind control, an art. Secret treaties have been made in back rooms, on the Internet, and in hidden laboratories. Your only hope is the New Resistance. People like Dance Torrence and his fellow urban warriors on Earth; Claire Rimpler on the L5 colony, FirStep; Smoke, the damaged visionary; and Alouette, a precocious cyber-jacked little girl on the cutting edge on a strange new frontier of human collective-consciousness, the Entelechy. Ordinary people bound together by the truth and a single purpose: to keep the secret darkness from becoming humankind's Total Eclipse—or die trying.

Other References to A Song Called Youth